This week flew by so quickly, starting with my sister's arrival from Atlanta on Monday and my mom's return from her Mediterranean cruise on Tuesday. But true to what I said last week, New York City is the place to be for the month of August. So starting with my sister Lori, we left JFK Airport on Monday afternoon and toured from the Brooklyn Bridge to Rockefeller Center. We made a short stop at South Street Seaport to check out the ships and then went to the heart of the city.
Even though I have lived in NY for over 20 years, I have never taken the time to really enjoy it, so we made a point of having lunch at the Cafe at Rockefeller Center and strolling down Broadway down to Times Square. When you really stop to look around, Times Square is absolutely breathtaking. I stood by and watched as Lori took it all in and saw my city through her eyes. My eyes circled from the huge electric billboards that light up the square to MTV studios, and then back around at the theater style seats built in the middle of the street, then down to the Good Morning America Studios. To stand at the crossroads of where news, music and theater and other forms of entertainment meet is amazing. Especially as someone who is interested in communications and the arts. So many people move here to live the dream of starring in a Broadway show, or breaking in the music or news industry and we have it at our fingertips everyday. I stress this to nudge anyone who lives in NY and has a dream to pursue the arts and has given in to fear. As Nike says, JUST DO IT! Live your dream and let these lights inspire you ;-) 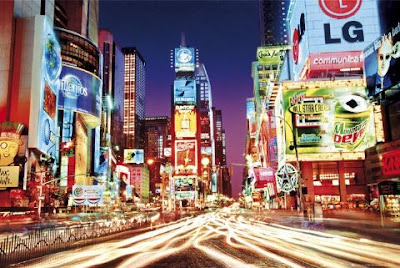 Lori and I spent the next few days wondering around Brooklyn and Harlem. Wednesday was dedicated to the Brooklyn Heights Promenade and Pier and then we went to Soho to do a little shopping. No trip to Soho is complete without a trip to the Apple Store on Prince St where we drooled over the new iPhones and Mac computers. Next was Greenwich Village with its cozy bars and boutiques and finally Washington Square Park to chill and people watch. We spent Thursday uptown on 125th St cruising by the world famous Apollo Theater and other landmarks before ending the night at Columbia University on 116th St. If you've never walked through the Columbia University campus, its definitely a sight worth seeing. As New York City's only Ivy League, the campus grounds are grand and transports you back to the 18th century with its large statues and well crafted architecture.
Today was by far the most exciting day of the week though, its the day that I finally picked up the keys to my new apt. (YAY!!!!!) As the previous resident, Bryan handed over the keys, he also gave me his card to reach out to him regarding my new neighborhood, Bay Ridge. It wasn't until I reached home that I looked at the card, and I couldn't help but smile. Bryan works for none other than NYC & Company, which is the official marketing, tourism and partnership organization for the City of New York. It is dedicated to maximizing travel and tourism opportunities throughout the five boroughs, building economic prosperity and spreading the positive image of New York City worldwide. I wonder if they're hiring....

For more information on NYC and places to visit, check out www.nycgo.com
Posted by EXCESS BAGGAGE at 6:04 PM