Musanze - Picture of the Week 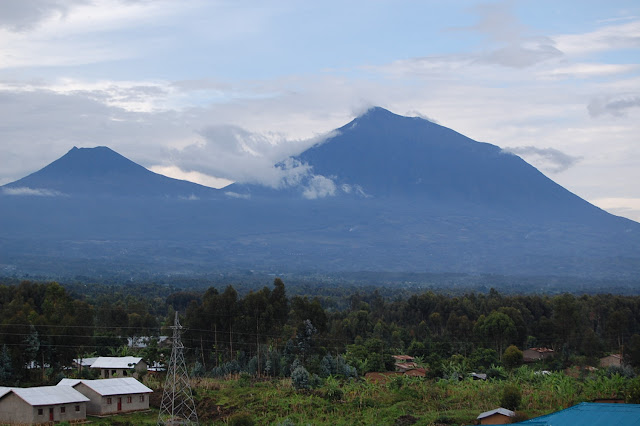 Fun fact: Musanze is the top tourist destination in Rwanda because of the mountain gorillas. The 1988 movie "Gorillas in the Mist" about primatologist Dian Fossey, was based on her work with the gorillas in Rwanda.  See the movie trailer below:


Posted by EXCESS BAGGAGE at 9:02 AM No comments:

Email ThisBlogThis!Share to TwitterShare to FacebookShare to Pinterest
Labels: Musanze

The world didn't end on May 21st as was predicted by Doomsday prophet Harold Camping and his followers, but this morning it certainly shook.

I was sitting in my living room early this morning in Kigali, when I heard a rumbling sound and then felt the earth shaking under me. After the tremor stopped, I walked over to my window and looked out to see if anything had toppled over or if anyone was earth. There was no visible damage or destruction from the window and everything was normal in my apt. In fact things were so normal that for a couple of minutes I wondered if I had imagined the whole thing. It wasn't until I got to work that Eric, one of the drivers, called out to me "Did you feel the earthquake this morning?" I told him that I had, and even though I was a little freaked out by what happened, I was thankful that no one was hurt.

I have never even thought about the possibility of an earthquake in Rwanda but after the events that unfolded in Haiti and Japan, I don't want to take anything for granted. It turns out that an earthquake struck Rwanda in February 2008 and killed 34 people and injuring more than 200 people. The 6.0 magnitude earthquake occurred along the Great Lakes Region/Great Rift Valley (reports differ) that includes Rwanda, Burundi and the Democratic Republic of Congo.

This time around, Rwanda was spared from massive destruction. May 23th moves forward and there is work to be done, but I will always remember this day as the day "the earth moved under my feet...and the sky DIDN't come tumbling down." Its another day to live my life to the fullest and do all the things I'm meant to do until I die, or until the world ends, whichever comes first!
Posted by EXCESS BAGGAGE at 7:15 AM 1 comment:

Quote of the Week:

"Don't let others create your world for you, for when they do, they will always create it too small."

Rwanda is a small country, but that doesn't stop the people here from thinking BIG!  Check out this video from Access Project founder, Josh Ruxin.

Posted by EXCESS BAGGAGE at 6:24 AM No comments:

CNN International did a special report on Kigali and its aspirations to be the ICT hub of East Africa. This city is truly rising from the ashes. Watch the video below to see the remarkable progress taking place in Rwanda.

Posted by EXCESS BAGGAGE at 12:47 PM No comments:

The more time that I spend in Kigali, the more this city surprises me. The city has a diverse population, with many expatriates from countries like Belgium, France, the United States, Korea, and Great Britain. At any moment you never know who you'll meet in Kigali.

Case in point, two weeks ago, I came back to the office after a launch event in another town. As I looked into one of the rooms at the far end of the office, a familiar face stared back at me. I couldn't place the face I asked one of my colleagues, she told me that it was Barbara Bush, daughter of former President of the United States, George W. Bush. I have to admit that I haven't really followed the lives of the Presidental twins, Jenna and Barbara since their dad left the oval office. However, I soon learned that Barbara is the co-founder and President of an organization called Global Health Corps (GHC) aimed at "mobilizing a global community of emerging leaders to build a movement for health equity." GHC places young people from the U.S. in year long paid positions with health organizations in developing countries in East Africa. GHC fellows work to strengthen health systems in various functions such as monitoring and evaluation, supply chain management, computer programming and human resource management. The U.S. fellow is paired with an international fellow so that they can share best practices and learn from one another. This is a great program for those who are not employees of Pfizer and would like to work in developing countries to increase health care capacity. Check out their website for more information: www.ghcorps.org 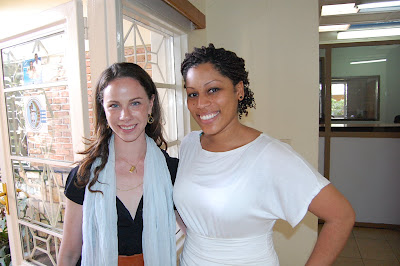 Posted by EXCESS BAGGAGE at 4:56 PM No comments:

After spending a relatively somber April in Rwanda,  I was itching for a change of scenery. Peter, a GHF from Pfizer China, working with PSI in Nairobi wrote and told me that he was planning a safari for the Easter holiday.  I replied with four magical words: "TAKE ME WITH YOU!"

Nairobi is the capital of Kenya, close to Rwanda in East Africa. The one hour flight from Kigali to Nairobi was pleasant and I arrived shortly after 8pm on Thursday April 21st. I spent the night in Nairobi with Elaine, another GHF from Pfizer Singapore. Early the next morning, our safari driver picked us up at  Elaine's apartment  and then we went to pick up Peter and his wife Cindy.  After driving close to six hours, we arrived at the Mara Simba Lodge located in the heart of the Maasai Mara National Reserve. We spent the next two days eating delicious food and seeing lions and leopards and elephants, oh my! I had the most amazing time catching up with Peter and Elaine as we discussed our fellowship adventures and danced to local music.

Here are a few things to know about Kenya and Maasai Mara before you go:

1.  Language: The official language of Kenya is Swahili or Kiswahili, which is spoken by over 30 million people throughout Africa and the Middle East.  Phrases include:

2. Maasai: refers to the people that make up the Maasai tribe found in southern Kenya and northern Tanzania, along the Great Rift Valley. The Maasai people can be identified by their red clothing, shaved heads and beaded jewelery. They are a nomadic tribe famous for herding cattle and drinking "milk blood", a concoction of cow's milk and blood. Maasi men are also known as warriors who hunt lions and other predatory animals as a rite of passage. An interesting fact is that during the colonial period, the Maasai people stood against slavery and lived alongside most wild animals with an aversion to eating game and birds. Maasai society never condoned the trafficking of human beings, and outsiders looking for people to enslave avoided the Maasai.

3.  Big Five: All members of the "Big Five" (lion, leopard, African elephant, African buffalo, and Black Rhinoceros) are found in the Maasai Mara.  The cast from the Lion King can be found there as well, with many warthogs, hyenas, birds, wildebeest and gazelles making the Mara their home.

4. Royally Romantic: It was reported that Prince William proposed to Kate Middleton in 2010, while on safari in Kenya. After spending two nights at Maasi Mara, I can see why. The sunset is absolutely breathtaking. I stood in my safari van and gazed at the purple, pink, orange and blue lights dancing together in the horizon, while giraffes formed silhouettes as they moved across the plain.  Even the Rhinos started "kissing"!

5. Living Dangerously: Nairobi is one of the most dangerous cities in the world, commonly called "Nairobbery" by locals and tourists. It is not safe to walk alone after dark because of the many pick pockets that will "help" themselves to your money. A fellow traveler told a story of a friend who had his truck hijacked in broad daylight by "uniformed policemen." Criminals are known for dressing as cops, so make sure you ask for identification before handing off goods or money to the police. Fortunately I spent only one day in Nairobi and that was more than enough time to go shopping at two major malls plus the courio market and do some sightseeing.


6. Yes You Can!: I have always thought that safaris, (other than the one at Six Flags Great Adventures) were outrageously expensive. However due to Peter's astute bargaining skills, our safari was top of the line but still affordable. This was definitely a bucket list item for me and I'm glad that I got the opportunity to do it during my stay in Africa. For those of you in the U.S., forget about going to the Caribbean or Mexico for your next vacation and plan a trip to Kenya instead! Don't forget to brush up on your Swahili and spend some time with Simba, Rafiki, Nahla, Timon and Pumba!


Posted by EXCESS BAGGAGE at 6:49 PM No comments: