For those of you traveling in the near future to Europe, Australia, Africa, Asia and even the Americas, please be advised about a very serious threat to human life: Human Trafficking! It is a form of modern day slavery and it exists all over the world, as young women are sold into slavery everyday. The A21 Campaign seen below, details some of the injustices that are happening right now in the beautiful country of Greece. I know that Greece is on the top of my list of places that I haven't seen yet, and while the beauty of Santorini is something to be marveled at,  it cannot mask the ugly truth of human trafficking. We should continue to travel and see the world around us, but we have to see it with open hearts and minds. No longer can we travel to exotic places and pretend we don't see those suffering or in pain. You have been warned, once you see the truth, there is no looking back....


Posted by EXCESS BAGGAGE at 6:47 AM No comments:

What's in the water??

In honor of Blog Action Day 2010, this post is dedicated to water, the highs and the lows of it.  From the cystal clear waters of the Caribbean Sea to the cold arctic glaciers that form around Alaska. We can't live without it, we swim in it, we ski on it but most of all we drink it. Anyone who's ever endured a hot steamy summer in the New York City, knows what it feels like to be dehydrated. That's when we burst open the fire hydrants and bask in the refreshing waters that flow from it. When water pours down our tongue quenching every thirst, its the sweetest taste known to man. Water was made for times like these and anyone who lives in a fairly developed country knows the joys of water.

Yet there are those who only know the anguish that comes water. Their water is different, it is filled with bacteria, debris, and feces. They bath, defecate and drink in the same water and never complain, because they don't have any other choice. I remember traveling to Haiti in 2008 for missions and working with the children from the ravines of Port-Au-Prince. Their water was murky brown and children played in it as if it was priceless gold they ran back and forth barefoot, bringing its brown stains into their homes. When we held the feeding program each day, the highlight of it was when it came time to pour the clean water from a donated well, into the cups the children were holding. Their smiles said it all; the water was good and they wanted more and more. Unfortunately it was more than we could give out and we had to turn some of the kids away. There was only so much water for each day's meal. Clean water as it turned out was a rare commodity.

The same was true a couple of months ago when I had the opportunity to travel to the Philippines on another missions trip. The sad part of it was that those of us who were from America couldn't drink the water that the locals drank. Their water was filled with bacteria and all kinds of toxins. I remember when one of my teammates accidentally drank a cup of fruit punch after it was made with the water, he was sick for two days. Not only did he run a fever and throw up constantly, but his body felt the "aftershocks" of the diseased water for days long after. Yet the people of this small town, drank it, cooked with it, and bathed in this same diseased water. The effects of it were seen on their rotted teeth and sallow skin. This was their water.

When I think back to these times and the people that I've met around the world who only know the kind of water that destroys the body, it makes my heart sad. I thank God every day that I live in a country where clean water flows from the pipe. As I drink it, I think about those who will never have this kind of water and although I can't physically go to every country and hand each person a bottle of clean water, there are many organizations out there that can. Through organizations such as Charity:Water and many others, millions of people around the world can experience the joys of clean water. Clean water no longer needs to be a rare commodity that only certain people can enjoy. It's a basic human right that needs to be shared, running over, filled to the brim from every village in Africa, Asia and region of this world. So to answer the question, what's in the water? We are in the water.  Our love for humanity that will compel us to donate, serve or do anything we can to make water a joy for everyone.

To find out more about how you can help, please visit Blog Action Day 2010. 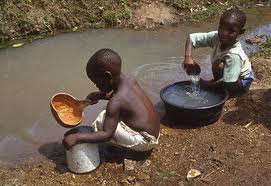 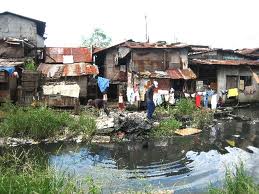 Tomorrow October 15th is Blog Action Day 2010 and the issue at hand is WATER! I will be blogging about it and you should too!

MOVE THAT BUS!!!!! Yes, its Sunday night and I am making the most of it by catching up with my favorite shows. I recently got a TV after a couple of months without one. Right now, my brain is on overload, because I am literally watching three shows at the same time. One of the shows, is Extreme Makeover: Home Edition. This week, its the Johnson family, two parents with five daughters, who live in a rotted out old house which leans when they are all in the same room.  The house was purchased for $3200 in the 1940s and the foundation has slowly eroded over the years, due to termite damage. After the family was sent to Paris for a week, (Oh-la-la), they returned home shouting "MOVE THAT BUS" and prepared to see their new home.
When the bus moved, right in front of them stood a beautiful three story stucco house, complete with a runway for their five fashionista girls. I am in tears just thinking about what the family has had to endure over the years as they lived together in this house. Yet this is a family that has never stopped laughing or living their lives despite the circumstances that faced them.   This reminds me of the message today at church which was taken from Philippians  4:11-13. "Not that I was ever in need, for I have learned how to be content with whatever I have. I know how to live on almost nothing or with everything. I have learned the secret of living in every situation, whether it is with a full stomach or empty, with plenty or little. For I can do all things through Christ, who give me strength."
Seeing the joy on the faces of the Johnsons is a reminder that we can be content no matter what happens in life. This family was joyful before the makeover because they had each other, after the makeover, their joy was multiplied because of the blessings they were able to share together. I know that I am guilty of looking around and seeing other people and all their "stuff" whether its material possessions or relationships and feeling discontent. But after seeing this show, its a reminder that no matter how little we think we have, there is always someone with much less than we have. There's that old saying about the man who was sad that he had no shoes, until he met the man with no feet.  Well the perfect antidote for discontentment is taking action and giving back. When you serve others who are disadvantaged, homeless, hungry, or sick, you have the opportunity to let them show you true contentment. Below is a link to ABC's A Better Community, which lists different organizations that you can volunteer with. So if you are truly feeling down or discontent, here's the opportunity to experience the joy of giving back. xo