Land of a Thousand Hills!

Rwanda is called the "Land of a Thousand Hills" because of its numerous hills. I like to call it, "Land of No-Name Streets", simply because I have yet to see a street sign. On my first real day in Kigali, I had the chance to tour the city and see some of its famous hotels and landmarks. Knowing where these places are gives you an idea of how to get around to other lesser known places. For example, instead of saying that you live on a particular street, you would say, I live three hills down from the Gorilla Hotel or near the UTC Center, etc. It can get pretty confusing at first, but after my first full week, I am starting to get the hang of it.
My days have been consumed with work from 8am to 5:30p with a break for lunch from 12:30p-1:30p. Since the entire office dines in, buffet style, I have been well fed thus far. Rwandan food is similar to the food of the Caribbean Islands, consisting of plantains, cassava and rice with beans. In the evenings, I am usually back home taking a nap. Now that the jet-lag is wearing off, I am free to do more and see more of Kigali and its neighboring villages. The only places other than my apt and work that I have ventured to is, to Heaven Restaurant and Bourbon Coffee. One thing to note about Bourbon Coffee is that they have three locations in Kigali, one at the two malls in town and one at the airport. Bourbon Coffee is the Starbucks of Rwanda, using the famous bourbon coffee beans grown in Rwanda to make their signature coffee drinks. The business has made a name for itself in Rwanda and has recently expanded to Washington DC and NYC. Yes, you too can get your fill of Rwandan coffee at their new location in Union Square.

So that has been my exciting life so far. If you're not entirely convinced that all is well, here are some pics of my first week in Kigali. Enjoy!
THE LANDSCAPE 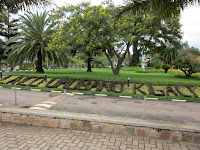 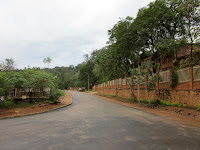 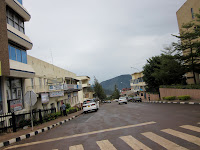 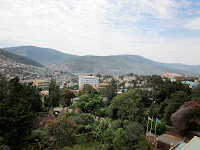 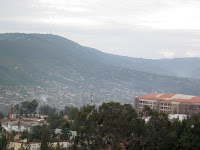 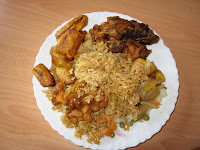 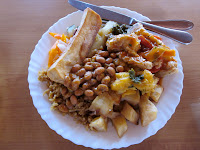 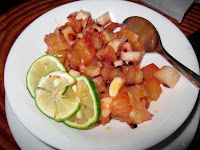 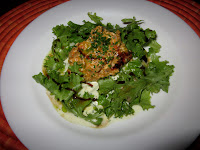 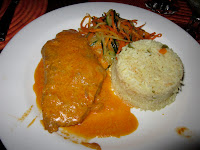 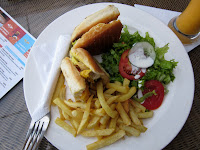 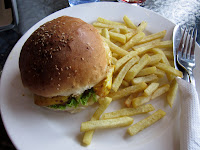 "Heaven is more than a place, it's a social enterprise." That's the first thing I read as I sat down for dinner at Heaven, a premier restaurant and bar in Kigali. Heaven is a not only known for its exceptional food and service, it strives to do good by giving back to the local economy. Based on an idea by Alissa Ruxin, wife of Access Project founder, Josh Ruxin, Heaven's goal is to create jobs, support local farmers, suppliers, technicians and artists, as well as provide ongoing training to workers to improve the local service industry.

That's an ambitious goal for Kigali, where there aren't many restaurants or much of a social scene. To say that I have spent most of my evenings at home catching up on work and chatting with friends and family, speaks volumes on the lack of things to do in Kigali.

So you can imagine how excited I was to go to Heaven and experience the best of Kigali. You immediately feel like you have been transported to another place. The ambience of Heaven is reminiscent of an island bungalow, with its thatched ceiling, open views and wooden tables and chairs. I ordered the "Heavenly Soup of the Day" which was a creamy chicken soup and the Charcoal-Grilled Chicken with Potato Croquettes. Everything is fresh and organic, and I could taste the difference with the chicken I served at Heaven and what I was used to back in the States. The food and drinks were delicious and I savored every bite. Definitely a worthwhile trip for anyone living in Kigali or planning to visit. 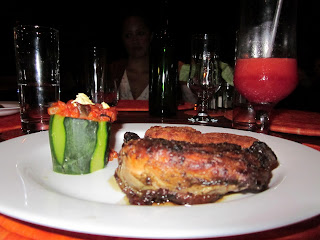 For more information on Heaven, please visit their website: www.heavenrwanda.com
Posted by EXCESS BAGGAGE at 4:48 PM No comments:

Eight hours from New York City to Brussels, another eight hours from Brussels to Kigali. That's the length of my journey to Rwanda. Just 16 hours stands between my old life and this new one. I really can't say that this journey started when I boarded the plane. It started a long time ago when I decided in my heart that I wanted to live my life to make a difference. It take guts to step out and do something different from your normal routine. Each day is afforded the same opportunities to do something extraordinary but rarely do we step up to the task. I always looked at the people who decide to step out in faith and accomplish enormous feats, with admiration and wonder. I knew that they were special, gifted with a certain 'je ne sais quois' that allowed them to reach the impossible. Celebrities and some just really brave regular folk who stand up for a cause, fight for the underdogs of society or just say NO to injustice. They are the real heroes in this world. How dare I think that I can do something as great as them. Oh no, for a long time, it was just a dream...

I read the book "The Dream Giver" by Bruce Wilkinson a couple of years ago. Its a book that stars a character named Nobody, who wakes up from a dream in which he achieved an impossible task. He lives in the land of Nobodies and is fearful of his dream. He thinks to himself, how can he a nobody have such a dream, a dream like that belongs to the Somebodies of this world, certainly not him. Yet his dream persists, despite the naysayers in his family and his city. He embarks on a journey that leads him into the land of Somebodies, through the Wasteland, and eventually to the place where his dream is fulfilled. Along the way, he learns important lessons about himself and what he believes. He learns to never give up on his dreams and that sometimes it is failure  that leads him closer to his dream.

I am thinking about all of this as I'm sitting on the plane. This is true not only for me but for so many of my friends and loved ones, who have amazing dreams for their future. One wants to start her own business, another wants to go back to school, travel overseas or get a record deal. Each dream is unique but the fears, emotions, heartaches and joys are all the same. We want to do someting different and accomplish the things in our hearts. I start to look through the Album playlist on my video monitor and come across the album "Wake Up Everybody" by John Legend and the Roots. This album immediately grabs me. It is soulful and inspiring all at once. As I listen to it, it evokes images of the Civil Rights Movement and Martin Luther King Jr. I remember his dream of desegragation, at the time, people probably laughed at him and told him, that his dream of seeing blacks and whites drink from the same fountain and go to school together would never come true. Unfortunately MLK Jr never lived to see his dream fully realized, but he set the foundation so that others could realize their dreams.

Dreams are great, but they should never stop there. Dreams should be lived out everyday, in the lives that we lead. I had this dream of going overseas and helping people in developing countries. I never knew that my dream would take shape the way that I did. I just started to say yes to some of the doors that were opened in my life. I learned from my failures and trust me, there were many to learn from. I know so many people who give up after the first failed attempt, they go back to their normal routine and promise to never try that thing again. So I want to encourage you to try again, and again and again, however long it takes you to get there, just do it. History is lined with people who never gave up, like Thomas Edison, Madame CJ Walker, Michael Jordan and countless others. So stop dreaming and WAKE UP! Do the things that you have only dreamed about and let your life count!

Voice overhead: "Welcome to Kigali, hope you enjoy your destination...."

Posted by EXCESS BAGGAGE at 7:06 PM No comments:

Its been a hectic couple of weeks preparing for this trip. From getting vaccinated to shopping for endless supplies, I really can't wait to get on the plane so I can finally get some rest. When all is said and done however, I wouldn't have had it any other way. That's the pace of NY life, go hard or go home. For those of us that live in the city, we know that everything is in overdrive. The non-stop social activities including two farewell parties, lunch and dinner dates, trying to see everyone before I leave. The "last meal" syndrome, where I eat everything in sight because as everyone keeps telling me, "you won't get that over there, so eat up". I'll be lucky if they don't wheel me onto the plane with all the "excess baggage" I've put on in the last couple of weeks.

Also as much training and preparation as you do for a trip like this, mentally it is very hard to imagine living in a culture that is radically different from this one. A culture that is slow paced, where things are not as easily available. I know there is going to be some culture shock, but I'm still very excited about the next couple of months in Rwanda. There is no guidebook, website, or class that can ever compare to the actual living in country experience. However, I truly believe that all of the trips that I have taken over the last couple of years to places like Brazil, Haiti, the Philippines, and Egypt have prepared me for such a time as this. The major difference with this trip is the duration and scope of work. Rather than visiting for a couple of days, I will be staying for a couple of months, getting to know the people, languages, cultures, and work ethics of Rwanda.

I am honestly very excited about this next chapter in my life and I am equally as excited for those of you taking this journey with me. I know that I am not alone in this experience as you send your support, prayers, and well wishes. I will be posting on a regular basis while I am in Rwanda, so keep checking back for the latest entries.

Posted by EXCESS BAGGAGE at 8:52 AM No comments: